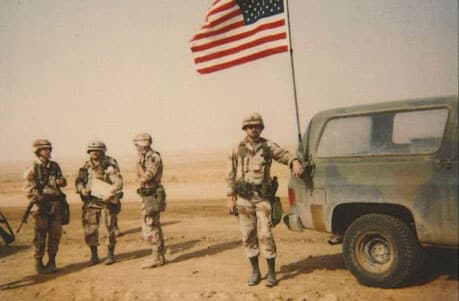 JUNE 2019: The American Legion Riders of Missouri are strong supporters of Missouri’s National Veterans Memorial. That’s how we got to know Sergeant Randy Owens, a Legion Rider and a veteran. The Legion was a big part of the Wall-to-Wall ride in 2017, when they traveled from Washington D.C. to Perryville to exchange the ﬂags. Since 2017, Owens has continued to be involved with MNVM, attending events and telling others about the campus.

Growing up in North Vernon, Indiana, Sergeant Owens knew he wanted to do one thing: attend the Indiana State Police Recruit Academy. Unfortunately, he found out after graduating high school that applicants had to be at least 21 years old to attend. Instead of sulking and waiting until he was old enough, Owens enlisted in the Army. His deployments out of Fort Bragg included Saudi Arabia, Iraq and Kuwait. He also served in Germany and Korea.

“My service began just as Vietnam was ending. The ﬁrst days were extremely rushed and in a hurried pace. There was a sense of urgency in the air. I was just barely 18 years old when I landed in Frankfurt, Germany, and the next morning I was put on a train by myself, ending up in Augsburg. For the ﬁrst 27 months, I worked with people who had checked out.”

Owens married in Germany fairly early in his military career, which helped him overcome difﬁculties with his ﬁrst company. His two oldest children were born in Germany on two different trips, and while most American children see the Parthenon in a textbook photo, his kids were able to take ﬁeld trips to it. At the same time, Owen’s couldn’t plan a family vacation due to the nature of his service, and he never talks with his kids about his deployments, a sentiment many veterans echo.

When asked about some of his experiences as an active duty member, Owens spoke of a time while deployed in Korea. He was there in 1988, when the Summer Olympics were being held. The rule was, according to Owens, if you could get tickets to the Olympics, you went to the venue and had a good day. He took a train to Seoul, spending less than $25 a day to watch Americans show the rest of the world how to play baseball and win.

“I got to Saudi Arabia at the beginning of Desert Shield. It was extremely hot the night we stepped off the plane, with humidity well over 100%. We lived in what they called the Saudi National Guard compound, which wasn’t too bad. We were there a week before we got moved out.”

Owens was responsible for all messages leaving the communications hub. When Desert Storm kicked off, the president’s order went through one of his satellite terminals. He was also the guy in charge of ensuring calls could be made back to the states and that football aired as scheduled on Sundays.

After his military career, Owens tried different jobs but had difﬁculty ﬁnding his position. Finally, he started working with the Missouri Department of Corrections as a drug counselor. He did this for more than 14 years before becoming a criminal investigator with the same department.

He’s had difﬁculty maintaining the friendships from his service. The internet has helped him stay in touch with comrades, but some have died and others live far away. One of his closest friends, a lieutenant from when he served in Korea, met his group in Arlington during the Wall-to-Wall ride, and they’ve since stayed in contact.